If you’re looking for a unique waterfall experience in Costa Rica, then you can’t go wrong with the Uvita Waterfall.

Conveniently located in central Uvita, this easy-to-access waterfall isn’t the tallest or the most dramatic—but it will get your adrenaline pumping in a totally one-of-a-kind way.

While we have yet to work up the courage, thrill seekers won’t want to miss a ride on this all-natural waterslide that plunges deep into a cool and calm pool below. 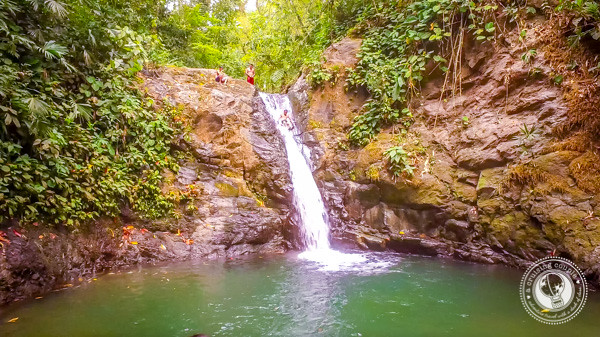 We first visited the Uvita Waterfall a few years ago, before we were living in the area. Our small group of friends were the only ones around, so we had no idea it was possible to slide down from the top. As such, we enjoyed swimming in the crystal-clear water and soaking in the peaceful jungle surroundings, but we weren’t as awe-struck by the Uvita Waterfalls as we were by, say, Nauyaca Falls (another must-visit nearby.)

It wasn’t until relatively recently that we were working with the Travel Channel on filming an episode for one of their shows that the film crew asked us if we knew anything about Uvita’s natural waterslide. We were a bit embarrassed to say that we didn’t—until we realized they were talking about the Uvita Waterfall! Of course, we quickly made our way back so that we could better experience this “famous” local attraction. 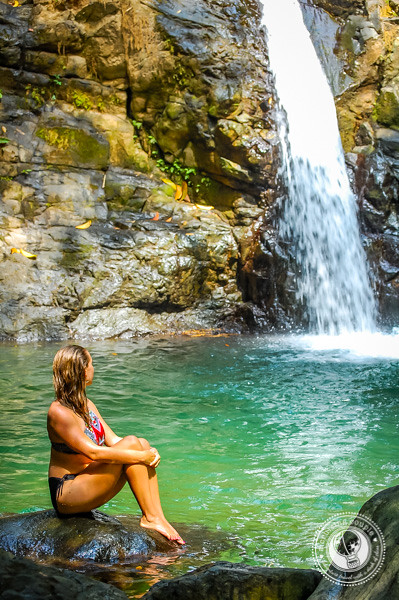 Now the Uvita Waterfall is one of our favorite places to spend a late afternoon. It’s about five minutes from our house, entry is only $2, and the refreshing swimming hole makes the perfect place to relax with the pups and a picnic. If you go on the weekends, there will almost always be locals continually enjoying the waterslide, which means constant entertainment if you don’t want to slide down the fall yourself.

Want to get a better idea of what the Uvita Waterfall is really like? Then don’t miss our latest travel video below:

What You Need To Know About Visiting the Uvita Waterfall 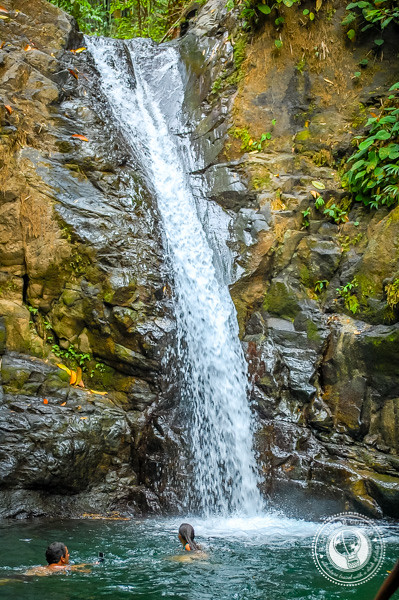 The Uvita Waterfall is super easy to access. Coming from San Jose / Manuel Antonio, turn left into Uvita Town just before the big BCR (Banco Costa Rica). Continue on this road, pass the cemetery. After the cemetery you’ll take a slight left, counting up the hill for about another kilometer or so. There are signs for “La Catarata Uvita” to make it even easier! The entrance will then be on your right, where you’ll find a small restaurant and a parking lot. It’s a relatively leisurely walk from Uvita if you don’t have a car.

Once you arrive, you’ll need to pay 1,000 colones ($2) for admission. Then you’re ready to go! You’ll head down some stone stairs to arrive at waterfall. These are a bit steep and can be slippery, but there is a plastic railway to help. It only takes five-ten minutes. Once at the bottom of the stairs, you might have to cross a small, ankle-deep river (depending on the season you visit.) Food, beverages, and well-behaved pets are allowed. 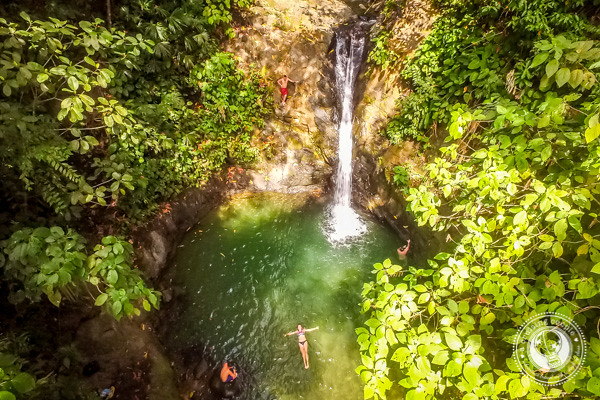 Apart from the main pool beneath the natural waterslide, there are some other swimming holes downstream that you’ll easily see while walking down the stairs. As for everywhere in Costa Rica, keep an eye on your belongings while you’re going for a dip.

After you enjoy swimming and sliding in the waterfall, stop by the restaurant for a smoothie or, our drink of choice, a michelada!

You definitely don’t want to risk climbing up the cliff face and then sliding back down if you don’t have travel insurance. 😉 We always use, trust and recommend WorldNomads. The few times we have had to claim, they’ve been great and easy to work with.

If you’re looking for a fun and easy-to-access attraction in the Uvita area, then you can’t go wrong with the Uvita Waterfall. Now, as always, we want to hear from you!

Would you take the plunge down the waterfall? Have you visited any other natural waterslides around the world?